Hmm, where do I start? Oh ya, admitting something to the world. Okay, coming out from the woodwork and conceding that I love, BTS! There I said it and no, I'm not ten, fifteen, or even twenty, but I got hooked, all thanks to my daughter and granddaughter.

You see, it began innocently with a visit to Atlanta, GA. Hey Nana, you want to watch some videos of my favorite group, and yes, it all went downhill from there. Well actually not, it was an uphill excursion, I am happy to admit. At first, there was some hesitation. Oh, of course I have to divulge they were damned cute. So the three of us sat in my daughter's office and watched one video, which became two videos, and then before I knew it, an hour or so had passed. Hey, I stated, I kinda like that song.

Well, two days later, I was asking (shhh, begging) to watch more. Soon we were in the office behind closed doors, watching, drooling, and making flirtatious remarks about these handsome young men. And wait, it's not just their looks (though that certainly doesn't hurt), but they can sing and they can dance. They have actual talent, and yes, they compose their own music, so there!

Then my son-in-law entered the room, and saw the look on my face. "Oh gawd, it's a contagion", he sighed aloud, and left shaking his head. Yup, it was all over and I knew it, I gave in and disclosed I was smitten. However, that was only the beginning.

Eventually at home in front of my computer, I would sneak a peek of a YouTube video, and secretly smile. Okay, I said to myself, save it, but don't share it with the public, it's just for ME! Then they multiplied, and before I knew it I had an entire BTS public folder, and damn, I really liked them, and I wasn't just doing it to impress my fifteen-year-old granddaughter; I was watching them because I wanted too.

She was thrilled that I liked them,and I shared all my latest reviews and faves with her. How cool is that? The next time I saw her, she was asking me to name the guys in the group. Oh, lordie, now I was in trouble. Pop quiz in fifteen. Didn't do so well at first, but I divulge, that I eventually got over that hurdle, and could do it with ease. Now she informed me, I would have to learn to distinguish their voices. That's impossible I said to myself, but yes, you already guessed - I can do it.

Then there's the BIG one. They invited me to go to Chicago. Oh, what's going on with that, I asked. There's a BTS concert and we bought you a ticket for mother's day. This was a big move. The other things, well, I could view or listen in private, but now I was going in front of the whole world (uh, Chicago) and letting everyone know that I actually liked these guys. I was hesitant I will admit, for I've seen pictures and saw videos (the two of them went to New York last year to see BTS), and I knew I would be amidst tens of thousands of pubescent, screaming girls. What was I getting myself into? But I went, and I'll tell you, I'm glad I did. What an impressive show. It was actually incredible. Don't tell anyone (oh hell, go ahead), but I want to see them next time they come to the U.S.

When her parents went away for two days, I flew down to Georgia to stay with her. We had a great time and guess what we did? Yup, your first two guesses don't count. We spent the whole time listening to videos, watching a full-length six-hour show of one of their last tours, and uh, well, er... I learned some dance moves to Boy With Luv. We had a blast, and when mom showed up the next day, we performed for her (and yes, I know you are trying to picture this in your head. Don't!)

Before I flew home, my granddaughter bought me a Jimin cup (he's my fave), and several posters, and a CD with a picture book. AND, the three of us visited a K-POP store in Atlanta. If you're not familiar with K-POP, it's stands for Korean pop and it's been really big for the last few years. AND yes, I did buy "stuff" for me, and my daughter threw in a few items for me too (oh, trust me, she's worse than I am. You should see her home office!) Wait you should see my granddaughter's room. I don't know how she sleeps at night with all those gorgeous faces staring down at her! 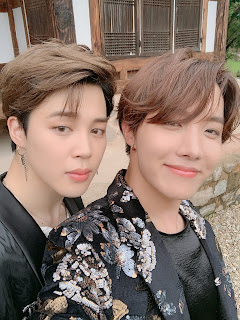 So the three of us have this steadfast bond, and it's not going away anytime soon. As I type these words, I'm looking at my second monitor screen, now featuring Jimin (Park Jimin), and J-Hope (Jung Hoseok), and I'm a full-fledged BTS junkie. I even use their music to work out in the morning. Have you heard enough?

So there, I feel better. I got that off my chest.

P.S. You know my sloths? Well one of them is named Jimin. There's a story behind that too! LOL! 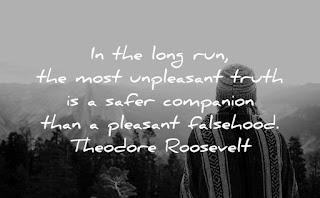 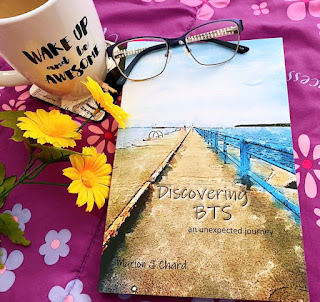